Spring. Here, and is coming...

Western Michigan has one of the most beautiful summers I've ever experienced; but oh how winter dawdles?! And spring seems to hide beneath a blanket of gray fog and extra layers of clothing.

Lately, when I wake, I make our bed, open up the bedroom and living room curtains and light a small candle as I pray over our days. I need light...even if that light comes from a small candle on the mantle.

I open up the blinds in the kitchen; the bright yellow kitchen with a new blue-gray tile floor recently gifted to us from our landlords. The walls and floors catch whatever light that trickles in and magnifies it.

And then there are the flowers. Oh how good He is to give us these small treasures?! Though spring hides, we've still been able to enjoy little bouquets I've arranged using flowers I've picked up at our favorite discount grocery. It may be as gray as slate outside, but seeing these little lights within our home is God whispering to my spring-starved heart, "Hold on, little one, spring is coming, spring IS near!"

I told myself a while back that I would get back to writing come Spring.

With Holy Week and Easter Sunday having come and gone, we are left with the knowledge that Our Savior is Risen! He is alive! Hallelujah! He too, has come and gone, and is coming again. However, His Kingdom, much like spring, seems to be hindered...

Where are you Lord, when Your people are being bombed on Easter morning? Where are you Lord, when women and children hide in swamps with pythons and crocodiles because the chance of death by these creatures is considered the better choice when compared to certain death at the hands of their countrymen? I struggle to wrap my mind around it all. Parents in the midst of loosing children? Going to bed hungry...again. Praying daily your son isn't shot on his way home from school by drug dealers, thugs, or the police. Yes, where are you, Lord?

And then I hear Him whisper again, "Hold on, little one, spring is coming, spring IS near!"

There are so many situations from my backyard to around the globe that I long to see Christ come and change. Make whole. Make right. Make new. And I believe He will...one day. Because He said He would.

But He is also doing these things right now. The changes may seem small or quiet or get very little news coverage. They are being carried out by His people living in His Kingdom Come that is both here and now and is still yet to come. These Kingdom people are boldly sacrificial. They are often not the loudest, the prettiest, the smartest or any other -est. But they are His people. They do not loose heart in the midst of the storm. They steady their gaze and weather it. Their hope is sure. Christ, the light of the world, is here with us, has gone to prepare a place for us, and is coming again!

It may not yet feel like Spring here on the Lakeshore of West Michigan, but according to the calendar, it is indeed, Spring!

Tulips liter the rooms of our cozy little Cape Cod home. Bursts of pink and yellow lift my spirit here on the inside as I remember the warmth of sunshine on my face and the refreshment of gentle lake breezes on my neck. Outside, snow is falling. Yes, spring is here, and is coming.

Just ask my husband, and he'll quickly tell you that I am slow. At everything.
I'm especially slow leaving the house once I've said "I'm ready".  I meander over old mail. I ponder life's impossible questions. I stare out the window for far too long sometimes. I've kind-of always been an old lady, really.

Anyhow, I've slowly grown more and more comfortable with myself over the years and actually like this trait about me (even if others do not!)

Before Phil's and my wedding, I remember several people telling me how their wedding days were a blur and how they'd remembered nothing of the day! I was bound and determined to savor my wedding day.

I still remember soaking in a bath on the morning of my wedding. Shaving my legs and sipping coffee. I remember seeing my good friend, "the wedding planner" giving instructions on how to hang the lights and deciding where the ferns should go. I remember another friend showing up wearing the same gap summer dress I had planned to leave in...and her somehow finding another dress to wear before I knew anything about it! I remember scarfing down hot Stromboli in the kitchen in my wedding dress with Phil right before guests started to arrive. And how one of Phil's groomsmen asked me if I was sure I wanted to marry Phil because he was still available and willing! I remember it all. Because, I'm slow. I soak things up.

Lately I've been thinking about how I want to capture every moment on film, on journal pages or in the blog-sphere so I won't forget our lives right now. Our mornings at the beach tossing sand into the waves. Or how his hair falls just so and his legs fold up like when he was a newborn when he falls asleep in my arms.

And then I exhale.

Because I savor. I live life slowly. I'm not going to lose these moments. They will always be with me. Even if in the end I lose my ability to remember, these moments are apart of me, because I've taken the time to live them.

If I've said it once, I've said it a hundred times, life is just happening too fast these days (yeah, yeah, I know, another old lady comment, but it's true!)

For me, taking things slowly, sitting and just looking at them, my guys, as they play in the backyard or laugh and splash at bath-time, its how I'm hard-wired...it's just how God chose to make me. Don't get me wrong, fast-paced people still savor; I just think they may have to work at it more. Phil is fast-paced. He is efficient. He can accomplish in an hour what usually takes me six! I love/hate that about him! But he can slow down in that hour he sets aside to do so. I just think its important to do so regularly and with intentionality. Before its all gone.


"What are our lives except a vapor that appears for a little while and vanishes and passes away?" James 4:14

We started the day with coffee and sticky buns. I'd like to say they were homemade, but that would be a lie. I brewed the coffee without placing the top on the pot so coffee grinds spilled over into our cups. Phil attempted to strain the coffee with a metal filter but there was really no saving it. So we left for church not nearly as caffeinated as we should have been. 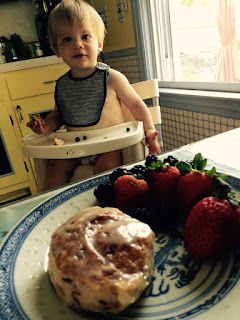 After church, R went down for his nap and Phil and I snacked, made iced lattes and cooked brussels sprouts (yes, roasted caramelized brussels sprouts that I could eat all day long!) We headed out for the annual summer OB/gyn Intern welcome party at the Spitzleys. We ate, drank, and played backyard games. R wore himself out chasing other (bigger) kids around the yard. His new favorite game is "bags" (so say the Michiganders), to all others (normal folk), corn hole. The men had the extra challenge of getting the bags in the hole without sacking the kiddos in the process. Oh, and here is R's "twin", M. They are almost a year apart and seriously could pass as brothers! Every time we get together with the folks from the residency, I'm reminded of how grateful I am that Phil made the choices he made that led us to this time and season that we are sharing with these awesome people. I know Phil prayerfully considered multiple programs, and He trusted God in accepting this site for his residency training years.  We don't always understand what God is doing when He call us to something (or somewhere); sometimes it takes us a while to see the pieces come together. But when we begin to see how He orchestrates all the details, it is something really beautiful....and something I would have surely made a mess of if it were up to me! 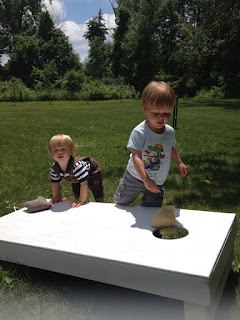 We left the party and picked up our bikes that we ordered on Saturday. We're still waiting on the two-kid trailer to arrive and I can't wait for a family bike ride adventure! While I got R squared away in bed, Phil took his new bike for a spin down to the beach. When Phil got home, we switched and I rode my bike down to the beach just in time for the sunset on the longest day of the year. I've seen some really incredible sunrises and sunsets all over the world, and I have to say, Lake Michigan sunsets are some of the best! I called my Dad on the boardwalk overlooking the Lake to wish him a Happy Fathers' Day. My dad is a man of few words, but that's one of my favorite things about him. We've shared innumerable quiet hours, often by the water and with rod and reel in hand. I hope our children get the opportunity to share those quiet moments with their Papa...down by the water, learning to "feel" the fish bite. 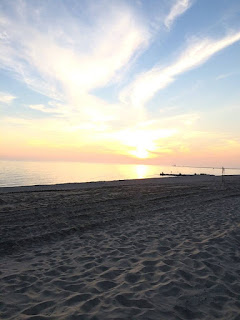 New Year's Resolutions: Why they're not such a bad thing... 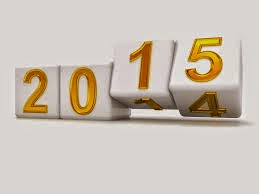 I've long been apathetic towards New Years' Resolutions. Its not that I think they're bad, its just that I haven't ever been into making them...

You see, to some extent, A New Year's Resolution is like any other resolution: a reset. a new beginning.

When I really think about it, I make New Year's Resolutions all the time. Each day, I resolve to do something. And I think its important to be mindful enough in our day to day living to resolve to doing something each day...even if the something is brushing my teeth before noon or making it to the pool for a swim (yes, these are actual daily resolutions for me :)

Over the last few weeks, several people have been talking about their New Year's Resolution(s). For some, its weight-loss. For others, its to be more organized. Some people are leaving Social Media behind in this New Year of 2015.

While I've decided to keep my resolutions private in my personal journal (Yes, a hardcopy, bound, leather journal (how archaic?!)), I nevertheless have jumped on the bandwagon and chosen to embrace our cultural practice of New Year's Resolutions.

Because who doesn't need a new beginning?

Isaiah 43:19 Behold, I will do something new, now it will spring forth; will you not be aware of it? I will make a roadway in the wilderness, rivers in the desert.

I instinctively hit my reset button both in the Fall and Spring. Summer is usually a less planned, more laid back, and more care-free form of me as a friend, a daughter, a sister, a wife, and now as a mother. By the middle of winter, I need an intentional reset.

I need to be reminded that God is at work in me and in those I know and love, and in our world. I need the hope that God is making a way...and not just a way, but His Way.